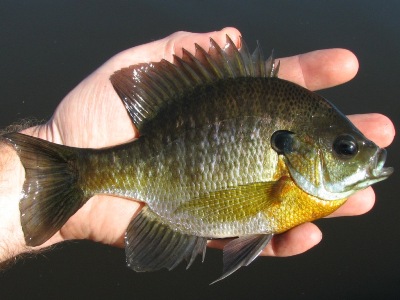 The bluegill sunfish (Lepomis macrochirus) is the most widely distributed panfish in North America. This colorful sunfish is a member of the Centrarchidae family which includes several species of sunfish, crappie, largemouth bass, smallmouth bass, and others.

Individuals are easily recognized by a black flexible tip on the gill cover, bright blue gill covers and chin, and a black spot or blotch near the base of the soft dorsal fin. The back and sides are colored dark olive green or brownish. The breast and belly may include red, yellow, or orange coloration.

Adults usually have vertical bars along their flanks. The striped markings  are usually prominent in smaller fish.

Bluegill sunfish are well adapted to living in ponds, lakes, streams and even brackish water. Bluegill rarely exceed 1 pound with 1/4 – 1/2 pound (7″ – 9″) individuals being the most common. Adult bluegills spawn from late May well into the summer.

Bluegill fry and young fish are a primary food source for numerous species of fish. Adult bluegill are eaten by largemouth bass, pike, pickerel, otters, aquatic birds, and other predators.

Three distinct subspecies of bluegill are recognized. They include the northern bluegill, coppernose bluegill, and a smaller bluegill from the Southwest.

The northern bluegill is the most common, occupying much of North America.

The coppernose bluegill (lepomis macrochirus purpurescens) is native to Florida, but have been widely distributed by private pond owners. Coppernose usually fewer but wider vertical bars on their sides than northern bluegill.

In the Southwest, L. m. speciosus is similar in appearance to northern bluegill but tend to be smaller in size.