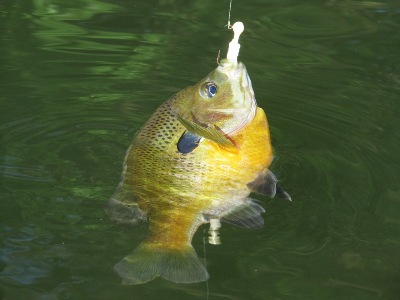 Summer is the most popular season for catching bluegill sunfish. Also known as bream, this colorful sunfish can be caught in a variety of habitats during summer.

During hot weather, the best times to catch bluegill and other sunfish is usually around sunrise and sunset. During these periods, sunfish are quick to attack small jigs, poppers, or live baits such as crickets or nightcrawlers.

During summer, many lakes and ponds experience heavy growth of aquatic vegetation. These areas can present challenges to anglers but fishing them can be especially productive.

In some areas of dense vegetation, lures such as weedless tube rigs or fly fishing tackle are among the only viable choices. Live bait fishermen have a few more options when it comes to dealing with heavy plant cover. Perhaps the best known is a setup called a “crappie pole” or “cane pole.”

These rigs consist of a long pole, to which a line is attached. The angler moves along very quietly, using the pole to lower baits into openings among the vegetation. When a bite is detected, the angler must lift immediately, snatching the fish out of the cover before it can foul the hook in the surrounding plant material.

Aside from dense mats of aquatic grasses, spatterdock, or lily pads can hold good numbers of bluegill. Lily pads tend to grow in shallow areas, often growing out to an abrupt drop off. These deep areas that border spatterdock colonies often offer excellent fishing. Anglers cast artificial lures, flies or pitch live baits as close as possible to pads in order to tempt wary fish into the open.

Other prime areas in summer include areas of deep shade under overhanging tree limbs. Trophy sized bluegill are very territorial and tend to take up residence under the best tree limbs, where food is plentiful. Pitching a piece of nightcrawler under a bobber within a few feet of these prime feeding areas can be extremely productive.

Although most bluegill spawn in spring, it is not unusual to see bluegill or other sunfish occupying nests as late as August or September. Panfish anglers should learn to identify sunfish nesting habitat and if possible avoid fishing these areas.