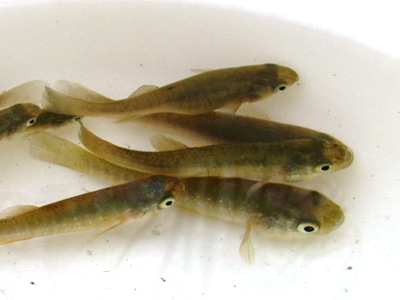 A variety of minnows and other small fish are popular as live baits for catching freshwater fish. Live bait fishing is popular in most areas of North America, although baits may vary locally.

Minnows and other small baits are excellent choices for catching mid-sized species such as crappie, bass, sunfish, yellow perch, walleye, sauger, pickerel, catfish and other fish.

Mummichogs are often used for freshwater fishing bait. These heavy bodied members of the killifish family are commonly found in brackish to saltwater estuaries, but can live in freshwater for long periods of time.  Mummichogs are usually 2 – 4 inches long.

Mosquitofish are found throughout much of North America. Although tiny by baitfish standards, these micro-baits can be highly effective for catching sunfish and other panfish.

Gizzard shad are fast growing forage species that are found in lakes and reservoirs. In some regions, small gizzard shad can be caught locally or purchased from bait shops for use as live baits.

Golden shiners are common in many areas. Shiners can be caught with seines or with small hooks and morsels of bait. These fish make excellent live baits for a number of freshwater species.

Suckers are another regional bait. These bottom dwelling fish are found in streams and creeks. Suckers can be caught with hook and line or nets.

Madtoms are small members of the catfish family. Although they have applications as baitfish, some species of madtoms have venomous spines and command great care when handled.

Farm raised trout are sometimes available as fishing bait. Small trout can be purchased live from producers or outfitters. Large lake predators such as musky, pike, lake trout and coho salmon gobble these colorful baits up like candy.

A note about regulations:

Before capturing or fishing live baits, anglers should check local regulations. Laws often include limitations on the types of baits that can be possessed or used for bait. Regulations may also limit types of gear that can be used for catching bait.

Another important issue relates to aquatic invasive species and the spread of harmful organisms. In these cases, local regulations may be in effect to limit the transfer of water borne hazards such as invasive fish, crayfish, zebra mussels, aquatic diseases or other pests. Some regulations affect disposal of waste water or left over baits and may also specify special handling of fishing equipment.