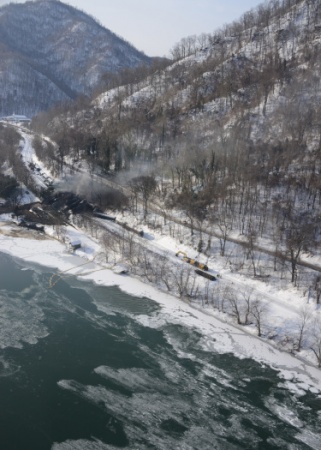 An unknown quantity of Bakken crude oil recently spilled into the Kanawha River near following a train derailment and fire.

West Virginia Governor Earl Ray Tomblin issued a State of Emergency for Kanawha and Fayette counties in response to the disaster which affected residents of both counties.

Response crews deployed environmental protective and monitoring measures on land, air, and in the nearby Kanawha River and Armstrong Creek. Approximately 500 feet of containment boom were deployed as a precautionary measure to limit potential impact on the environment.

On-scene assessments determined that 27 cars derailed and 19 were involved in fires. No rail cars entered the Kanawha River during the incident. The train consisted of two locomotives and 109 rail cars (107 tank cars and two buffer cars). It was traveling from North Dakota to Yorktown, Virginia.

One of West Virginia’s most important waterways, the Kanawha River is a popular destination for freshwater fishing, kayaking, canoeing, and siteseeing. The river is home to smallmouth bass, musky, walleye, sauger, channel catfish, flathead catfish, sunfish, suckers, and other species.