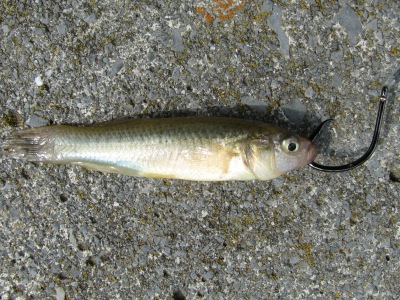 Circle hooks are an important tool for freshwater anglers. Originally used in commercial fishing, these uniquely engineered hooks work quite differently than most other hook styles. As anglers continue to release more and more fish, circle hooks have become an important part of freshwater fishing technology.

As the name implies, circle hooks have a circular shape. The barb curls inward, following the hook shape. Originally, circle hooks were not offset, but tackle vendors now offer both offset and non-offset models. Hooks are also available in several wire sizes as well as color variations.

For fishing live baits, circle hooks are often used with a Carolina rig. The setup employs a single hook at the terminal end of a monofilament leader. A egg sinker is often included at or above the top of the leader. Egg sinkers can be added to the running line above a snap, or added to the Carolina rig itself. Typically some method is used to prevent the sinker from sliding down the leader and reaching the hook.

The resulting rig allows a live bait to swim naturally, while the weight carries the fish to the bottom or down to mid-depths. When a fish takes the bait, the leader provides some slack so that the fish does not detect the weight or main line right away. Typically the angler will notice some movement of the rod tip when a bite occurs.

Circle hooks can also snelled and used under bobbers or with traditional top and bottom style leaders. Although circle hooks were originally used to catch large saltwater fish, new models work well for catching a variety of freshwater species, even panfish and other small species.

Due to the design of the circle hook, the angler must not snatch the rod tip when a bite is felt. Instead, anglers give the fish a moment and perhaps even pay out a few feet of line. Once the fish begins to move away with the bait, steady firm pressure is applied to the line. This allows the hook to pull upward from the gullet and towards the jaw. As the fish moves away, the hook is carried into the corner of the mouth, where its design allows it to catch and penetrate.

Although the chances of an initial hook set my be slightly lower than traditional hooks, the benefits usually outweigh this shortfall. In many cases catch rates actually increase when using circle hooks as most fish are hooked firmly in a firm area of the jaw. This not only helps anglers land more fish, but can have a dramatic impact on lowering fish mortality due injuries from deep hooking.