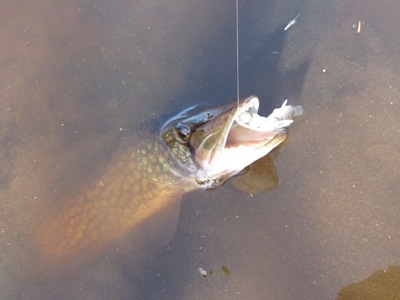 Chain pickerel are relatively small members of the pike family. Although they do not reach monstrous sizes like their larger cousins (musky and northern pike), they are formidable gamefish. Anglers distinguish chain pickerel from other pike species by a conspicuous dark bar beneath each eye and fully scaled cheeks and gill covers.

These slender predators hunt primarily by stealth, suspending motionless among vegetation or orienting to objects such as submerged stumps. When forage species stray near, they strike with lightning speed, holding on to prey with their sharp teeth. After a meal is immobilized, the pickerel may spit it out momentarily before swallowing it whole, head first.

Pickerel are found in small ponds, lakes, rivers, and creeks throughout central and eastern North America. In addition to their natural range, they have been introduced extensively in other areas where they sometimes establish strong populations. They tolerate a higher level of salinity than most other freshwater species and are often found in brackish creeks near saltwater estuaries.

Chain pickerel are caught with conventional lures, flies, and live baits. Throughout much of their range, chain pickerel are primarily a cool weather species. Although they can be caught at any time of year, anglers are much more likely to encounter these specialized hunters when vegetation is minimal and forage species are most abundant in open areas.

Chain pickerel readily strike many of the same lures that are used for largemouth bass. When targeting these fish specifically, anglers often select lures that offer at least some protection against their razor sharp teeth. These include inline spinners, spinnerbaits, crankbaits, spoons, and other lures that provide some distance between the hook and the running line.

Plastic worms and other soft bodies catch pickerel, although many are lost due to cut offs above the hook. Some anglers fish soft plastics or other vulnerable rigs on braided lines which offer some resistance to being cut by the pickerel’s razor sharp teeth.

Pickerel, pike, and musky are occasionally seen following a lure right up to boatside. A popular technique to counter this is called the “figure 8”. When a lure nears the angler, the rod tip is moved so as to guide the lure in the shape of the number 8. This erratic lure action sometimes results in a vicious attack by pickerel. A loose drag is imperative as is alertness by the angler, otherwise the fish may miss the hook or break the line.

Chain pickerel frequently attack sunfish or other panfish that are being reeled up by anglers. A few anglers exploit this behavior by fishing relatively large baits under a float or on a Carolina rig. Small sunfish, perch, suckers, or other species are used, all of which are food sources for pickerel. In some areas, frogs, crayfish, and other live baits are known to be effective.