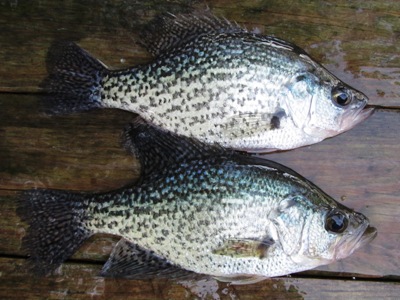 During the fall season, anglers that have been busy with other species often switch back to crappie fishing. Targeting these hard fighting fish during the fall can be rewarding, although they fishing can be red hot one minute and shut down the next.

Simple jigs are often the most effective lures for catching late season crappie. These usually include marabou crappie jigs or basic ball jigs rigged with curly tailed grubs or other soft plastic bodies. Tube lures are another popular choice, usually rigged with special jig hooks. Lure bodies are also available in scented versions, which produce well in some situations.

Experimentation with jigs can be an important practice when targeting fall crappie. Many experienced anglers pay close attention to jig selection as crappie often bite certain colors or patterns while ignoring other offerings. Other important factors include the depth at which jigs travel and the action that is induced by working the rod.

Small metal jigs can also be effective during the fall. These lures are well suited for situations where crappie have staged along channel edges, gravel bottoms, or other deep areas where few obstructions are present. They work best when casted away from the boat and allowed to flutter towards the bottom using a slow jigging action. When fish are located at a given depth, the angler can often catch several fish from a school by repeating the same technique over and over.

Although plastic worms are usually associated with catching largemouth bass, they can also be effective on fall crappie. They work well when crappie are found together with bass or other gamefish. When using soft plastic worms for crappie, short, heavy bodies are a good choice, especially when rigged with smaller hooks. Some anglers prefer to fish these lures without any weight, while others employ Texas rigs, Carolina rigs, dropshot leaders, or other setups.

In large impoundments, crankbaits are sometimes used for catching crappie. Although crankbaits are not suitable for all conditions, these lures offer a few advantages over other lures. Crankbaits typically feature a specialized lip or other design element which causes them to dive to a given depth when retrieved or trolled. Most crankbaits are equipped with multiple treble hooks. These lures can be trolled or casted and are well suited to fast paced fishing styles. Since crankbaits mimic baitfish, they are a good choice for fishing open lakes or reservoirs where anglers are likely to encounter several species of gamefish.

As weather systems alternate across North America, fish cycle thru periods of inactivity mixed with aggressive feeding. Many experienced fishermen watch the barometer and other indicators to predict the best fishing times. Some anglers also scout a number or habitats, hoping to unlock weather-related secrets of crappie behavior.

Time of day can be critical during fall crappie fishing. Crappie are notorious for being shy during bright sunlight. Unlike summer fishing, fall crappie may be slow to bite during the early morning. As daytime temperatures rise, activity often increases. The best fishing often occurs during the late afternoon, when sunlight levels are lower. During these feeding periods, crappie often seem to appear out of nowhere, taking lures on nearly every cast.