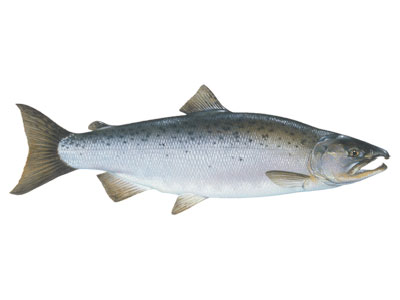 The coho or silver salmon (Oncorhynchus kisutch) is one of North America’s largest and most sought after salmon species. Adult coho salmon average about 8 pounds. Trophy fish can exceed 35 pounds.

Sea run coho have metallic-blue or greenish backs, silver flanks, light undersides, and small black spots on the back and upper lobe of the tail.

During the spawning phase, the species changes appearance considerably. Their coloration changes to bright red sides, blue-green heads and backs, dark bellies and dark spots on their backs.

In North America, coho occur from Alaska to central California. They also occur in parts of Asia. The coho is one of several Pacific salmon species that have been introduced into the Great Lakes.