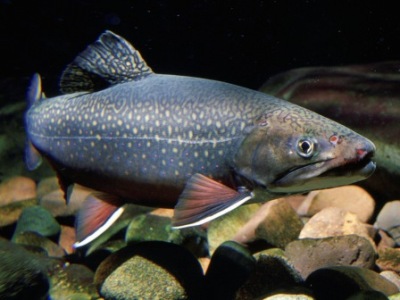 The brook trout (Salvelinus fontinalis) is one of the most beautiful freshwater fish native to North America. Brook trout are members of the char family, which includes lake, bull and blue-backed trout, Dolly Varden, and arctic char.

In freshwater streams, brookies are typically smaller than other trout, typically reaching sizes of 7-12 inches. Occasionally, anglers land fish of 18 inches or more.

The species is notable regionally for a number of reasons. They are the only stream-dwelling trout native to the Great Lakes. The brook trout is Pennsylvania’s official state fish. Brookies have a cult following in several New England states, where they are also called “square tail”.

In the Great Lakes region, brook trout known as “coasters” live in lakes and ascend rivers to spawn.