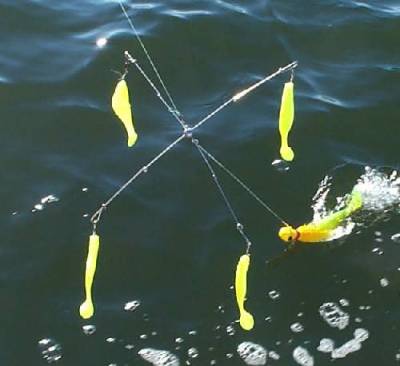 Umbrella rigs, once used only for saltwater fishing, have gained popularity among freshwater anglers. Alabama rigs are smaller with similar features. Both rigs are used to exploit a well known fish behavior; fish are often attracted to multiple baitfish or other prey.

Umbrella rigs feature multiple arms that radiate from a fixed center, similar to the way most umbrellas are constructed. The number of arms can vary from three to six, depending on the design.

Most traditional four-arm umbrella rigs feature arms that stand off at an angle of 90 degrees. Alabama rigs use a similar design, although the arms are swept back at a more streamlined angle. In addition to these two basic designs, there are numerous variations.

Most umbrella rigs are equipped with eyes or snaps on each arm as well as on the center point. Some rigs have weight molded into the center point while others feature a lure body at the center.

The primary lure is rigged from the center point. Additionally, each umbrella arm is equipped with a teaser or lure. There are many variations including models that feature soft plastic grubs, shad bodies, surgical hoses, or other lure styles.

Regardless of their configuration, umbrella rigs and Alabama rigs move through the water in such a manner as to mimic a school of baitfish. Larger models are used for trolling while some of the smaller designs can be casted.

In recent years, full sized umbrella rigs have gained popularity in a number of freshwater fisheries. They are often used in large impoundments for catching trophy-class landlocked striped bass.

Alabama rigs and other multi-lure rigs have also gained popularity among bass fishermen. In 2012, a new Virginia state record spotted bass was caught with a castable multi-lure rig.