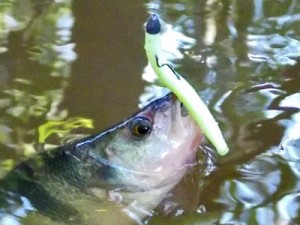 In Effective Fishing Techniques – Part I, a number of factors which affect fishing were cited.  The following list covers additional concepts that are known to help anglers catch more fish:

Scents can either attract or repel fish. The repellant action of human or chemical scents is major problem in fishing. Natural scents not only serve to attract fish, but also to help mask the negative odors that anglers pass on to fishing equipment.

When top anglers are asked to list the most objectionable odors related to fishing, they often cite human scents, petroleum products, perfumes, sun block, insect repellent, food-related scents, and others.

When anglers are asked to name their favorite attractants, the list is often surprising. Many anglers prefer scents such as blood, fish slime, fish oils, shrimp, crab, cheese, garlic, and anise. Some fish attractants originate from local forage species such as crayfish or other prey. The popularity of natural baits for freshwater fishing is due in part to the important role that scents play in fish behavior.

In addition to environmental influences, color choices are sometimes based upon known fish behavior. One of the most famous examples is known as “odd man out.” The phenomenon usually occurs when fish are presented with a group of choices, such as when anglers troll multiple lures at once. To execute the “odd man out” fishing technique, anglers rig several lines with lures that are all similar in color except for a single contrasting lure. In some situations, fish tend to choose the odd colored lure from the group of choices.

Other color-related events occur when anglers exploit fish behaviors such as curiosity or aggression. Anglers sometimes resort to using brightly colored lures when fish are finicky. Although the reasons are not always clear, unusually colored or gaudy looking lures sometimes incite strikes from fish that ignore more natural versions. Fish that exhibit this behavior are sometimes known to be experiencing periods of non-feeding. This behavior is known to occur during the spawning season with some species of freshwater fish.

In most fisheries, size matters when it comes to baits and lures. For example, trophy fish are sometimes targeted by using larger than normal baits. In rare cases, trophy-class fish can be caught by using tiny offerings. Often, fishermen learn about the diets of fish and then try to select tackle that resembles predominate food sources.

Nothing beats time in the field. In order to hone their skills, anglers fish throughout the seasons, enduring storms, bitter cold, heat, insect bites, long hours, and a host of other conditions. Fishermen sometimes record their observations in fishing journals.

In some fisheries, fish can see the angler, shadows, boat, rod, or other equipment. Under some conditions fish can also see fishing line, hooks, and other tackle. Experienced anglers sometimes detect these behaviors and capitalize on them whenever possible. For example, an alert angler might switch to ultralight tackle when clear skies and water is encountered. Another little known technique is to fish the first and last hours of the day during clear, calm conditions.

Successful anglers often notice details that are often overlooked by novices. These include frequent inspections of hooks, knots, line, and other equipment-related tasks. Top anglers also notice where fish are found as well as any environmental factors that might exist. Was the barometer falling when the best fishing occurred? Did the arrival of fish coincide with other natural events? Do trophy fish seem to orient to a certain physical location or structure?

Professional tournament anglers, fishing guides, and other professionals often fish on a daily basis. Although they sometimes use the same techniques for weeks on end, pros often stay on alert for changes in fish behavior.