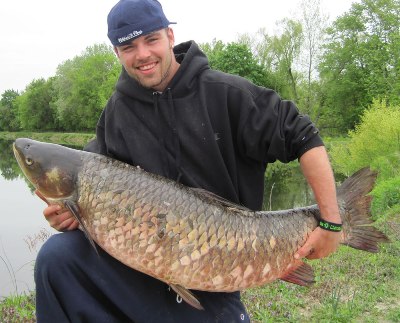 A huge Grass Carp caught by James Dempsey on May 12, 2011 is officially a New Jersey state record. The huge was taken from Curlis Lake and weighed an astounding 55 lbs. 8 oz., surpassing the previous record set in 2008 by one pound, one ounce.

James was casting from shore with 10-pound test line and corn as bait when he hooked the giant fish. It took him 2 hours before he could finally land his new state record. The grass carp measured 47.75 inches in length and had a 30-inch girth.

The New Jersey State Record Fish Program was revised in May of 2007. It revolves around a specific list of eligible species, and is based on weight alone (there are no line classes). The program goal is to increase awareness of fishing opportunities for species that are regularly sought after and routinely found in the freshwaters or off the coast of New Jersey.