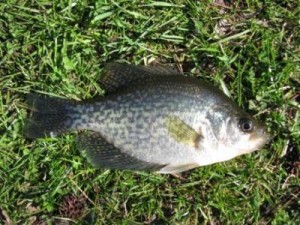 Black crappie and white crappie are the most abundant sport-fish in TRR. In 2016, trap nets captured more than 60 crappie per net, almost double 2015 rates and above a seven-year average.

Walleye are the second most abundant sport-fish in TRR. Gill nets captured more than 10 walleye per net in 2016, well above the 20-year average of 4.6 walleye per net.

Northern pike numbers are found in low densities compared to crappie and walleye, with about two pike per gill net caught in recent years.

Night-time electrofishing sampling showed smallmouth bass are abundant, but the majority sampled are less than seven inches. The juvenile fish are important for forage for adult sport fish, however.

FWP employs a variety of sampling methods on the reservoir including overnight trap-sets, gill-net sets, seine hauls, and electrofishing.