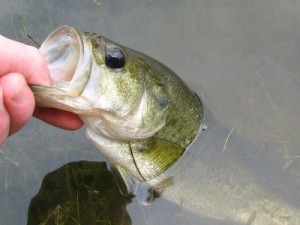 According to NCWRC, summer can produce high water temperatures and lower dissolved oxygen levels in reservoirs and rivers, conditions that can stress largemouth bass. To minimize stress on fish, an angler who plans to catch and release the fish should land the fish quickly and handle it as little as possible.

“Try not to remove the fish from the water, even when you’re removing the hook from the fish’s mouth,” said Christian Waters, Inland Fisheries Division chief for the N.C. Wildlife Resources Commission. “Handle the fish as little as possible to help reduce the loss of slime coat, which is the fish’s main defense against infection and disease.”

The following suggestions from NCWRC include largemouth bass catch and release tips, livewell tips, tournament guidelines, and other additional information.

Fishing tournament organizers can do their part to help keep fish alive by adopting best handling practices at all events. These include staggering weigh-in times to reduce the time fish are held in weigh-in bags, arranging for release boats to return bass quickly to the water and equipping recovery stations with oxygen and recirculating water.

Organizers also can provide holding tanks during the weigh-in with water 5 degrees below the reservoir or river temperature and with oxygen levels above 5 ppm.  They also can reduce the number of competitive fishing hours.

An alternative to the traditional weigh-in tournament is to conduct a “paper tournament,” which doesn’t require a weigh-in. “This is an especially helpful strategy during periods of extreme heat,” Waters added.

More information on keeping bass alive, including the B.A.S.S.-produced publication, “Keeping Bass Alive: A Guidebook for Tournament Bass Anglers and Organizers,” is available on the NCWRC website: www.ncwildlife.org/fishing.

Also available from NCWRC is a “Keeping Bass Alive” card, suitable for downloading and printing that provides tips for both recreational and tournament anglers.