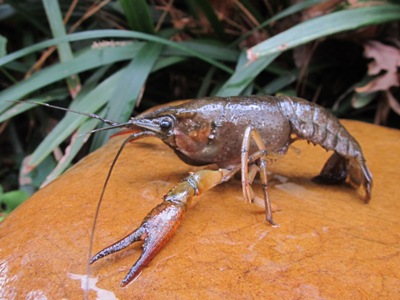 Smallmouth bass, like their relative the largemouth bass, are opportunistic feeders. Their diet is often dependant upon the environment where they are found.

In cool lakes, smallmouth feed heavily on crayfish, small fish, aquatic insects, and other invertebrates. Studies have shown that smallmouth sometimes change their diets seasonally, feeding on crayfish for much of the season, but consuming larger quantities of fish in late summer and early fall.

Smallmouth bass are also found in clear, moderate current rivers. In these habitats, smallmouth are often found around rocky bottoms, pools and shaded areas. Here they feed on crayfish, aquatic insects, and other invertebrates that hide among rocks and stones.

In flowing streams, smallmouth often display an unusual feeding behavior. They are known to follow behind northern hog suckers. A bottom feeder, the hog sucker grubs among stones, often dislodging small crayfish, insect nymphs, and other prey. Positioned just downstream of the sucker, the smallmouth eats any prey that is swept by.

In a few areas, smallmouth are found in the same habitats where largemouth bass reside. Although the two species compete for crayfish and other invertebrates on a limited basis, studies have revealed that largemouth bass feed primarily on fish.

Anglers targeting smallmouth bass may benefit by starting with a crayfish-crayfish-crayfish strategy. A variety of jigs, soft plastics, and other lures are available that resemble crayfish. In addition to shape, lure action, presentation, feel, and scent are all factors that can affect success.

When crayfish-type lures fail to produce, smallmouth may react to alternative lures. During periods when smallmouth are focused on insect hatches, fly fishermen may have the advantage.