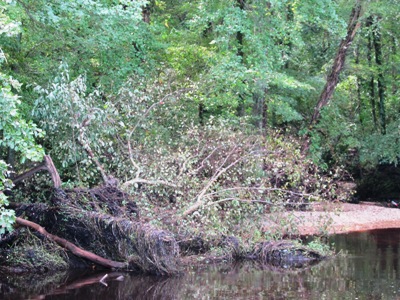 Floods can affect fishing in freshwater lakes, reservoirs, ponds, rivers, creeks, and streams. When floodwaters move thru fishing habitats, fishing is disrupted for days or weeks.

Eventually, water levels recede and anglers return to their favorite body of water. When fish habitats are exposed to flooding, their topography often changes. By visiting traditional fishing areas after floods recede, anglers can gain valuable insight into how a waterway has changed.

In creeks, and streams, areas where water flows tend to be restricted can change dramatically during flooding. Although some habitat is destroyed, important new structure is often created. Along the shoreline, vegetation, soil, rocks and other materials may be ripped away and carried downstream. Some objects move a short distance, while others may move for miles.

In some areas, partial damming occurs as logs and other debris are piled up by floodwaters. These structures can change dramatically during floods. Old debris may be cleared by rushing water while new buildups may occur in other areas. When live trees are taken down by high winds or raging floods, their branches often trap objects that float by, causing significant pile ups of debris.

Rocks, gravel, and sand may also be deposited or exposed during floods. These materials often create important habitat for fish and invertebrates. Rocks and other large objects create eddies where fish can rest and feed. Gravel beds become important as feeding areas. In most bodies of water, gravel beds also provide important spawning habitats for fish.

Many man-made lakes and reservoirs are created by damming streams or creeks. Flooding can have impact these structures considerably, often affecting fish populations, behavior, and distribution. During major floods, logs, brush and other debris may be deposited on the bottom where creeks and lakes converge. In some areas deltas are formed by the buildup of gravel, sand, mud or a combination of materials. Small islands may even appear in these areas.

Initially, fish and other wildlife may be displaced into the main part of the waterway. At the dam, water continues to flow at higher than normal rates until the water level stabilizes again. During this period, the lake or reservoir may experience some beneficial flushing as surface scum, trash, oils and other contaminants are washed downstream.

In the first days after flooding, fish may feed erratically. Food supplies are often abundant, especially along shorelines where insects and other small prey have congregated. Eventually, the incoming water flow returns to normal and visibility will begin returning to normal. Some lakes will see experience algae blooms and insect hatches following flooding.

Anglers usually choose to cover a wide area initially, looking for the presence of fish. For lake fishermen, this usually includes areas near the dam or along shoreline vegetation. In some cases, fish can be found in much shallower water than normal, feeding on an abundance of prey that has been displaced by flood waters. When fishing after floods, snags, floating debris and other obstructions can hamper fishing. Weedless lure designs are often essential. In some cases, experimentation with a few simple lures can result in excellent fishing.

In deeper lakes, boaters with sonar may locate newly deposited logs, debris or other bottom structure. As the waters settle down, these areas may begin to attract fish that have been swept into the lake. Fish finders may also detect suspended fish that are sulking in habitable areas.

Many of the same techniques that work in lakes and reservoirs apply to streams and creeks. Finding slow moving water may be critical for success as fish may avoid strong currents or areas where silt is suspended. Some anglers will use fly fishing tackle, while others may employ conventional lures or even live baits. As with lake fishing, paying attention to the behavior of fish and forage species can be critical for success.

Despite the challenges, a fishing trip following recent flooding can be a valuable experience. Depending on conditions, anglers may experience poor fishing or outstanding success. In either case, a trip following a flood can provide anglers with valuable knowledge about fish habitats.