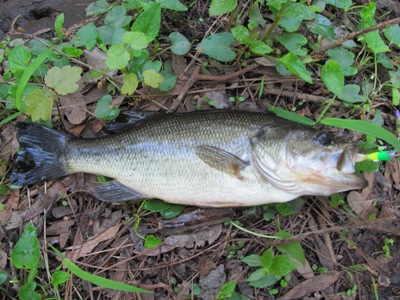 During spring, largemouth bass are usually very active. Prior to spawning, they feed heavily as their prey move in response to seasonal changes. In eastern North America, largemouth sometimes make abrupt adaptations to their feeding patterns, as species of fish, crayfish, amphibians show up in ever increasing numbers.

In some cases bass may eat the spawning species itself. In other cases bass do not feed directly on the spawning fish or their eggs, instead they feed on smaller fish or other aquatic life that are attracted to spawning areas.

Bass may also lurk along spring migration paths, intercepting prey as it arrives. These areas can include restrictions or edges of channels or current flows, especially in creeks or tidal environments.

Bass behavior can seem strange during spring activity. For example, bass are sometimes seen very close to the water’s edge, even within inches of the shoreline. While this might seem unusual, this behavior can be explained by studying the species upon which the bass are feeding.

During spring, aquatic vegetation is sparse in some areas, leaving forage species exposed. Young sunfish, crayfish and other prey are often found around shoreline vegetation, fallen branches or other structure. During these periods, bass do not hesitate to move into very shallow areas in order to feed.

Along slightly deeper edges, beds of spadderdock begin to appear and bass quickly begin patrolling these edges. As more and more leaves unfurl and cover the surface, complex communities take up residence among the pads.