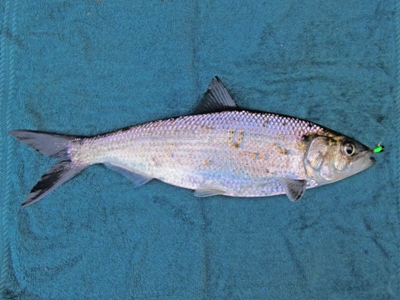 Maryland’s 2011 Hickory shad run has begun. Recreational fishing for these acrobatic fish should continue until mid-May.

After Hickory shad populations declined in the late 1970s, a moratorium on harvesting was imposed in 1981. The fish have since rebounded in the upper Chesapeake.

After the state implemented restocking efforts, populations have increased in several watersheds, including the Patuxent, Choptank and Nanticoke Rivers. As populations have grown, hickory shad have expanded to establish spawning runs in several other rivers as well.

Hickory shad are anadromous; they spend their adult life in the near shore waters of the Atlantic ocean and coastal bays, ascending streams and rivers each spring along the eastern seaboard.

Hickories can be caught in numerous tributaries of the Chesapeake Bay, with the Susquehanna, Gunpowder, Patuxent and Choptank Rivers being known for strong spring runs.

Hickory shad are part of the herring family and the lesser known relative of the iconic American shad. They can be caught by using small shad darts on ultra light spinning tackle, or on a variety of small “shad flies” on fly rods.

These fish are smaller than American shad, averaging 14 inches in length, with large specimens topping 20 inches. The Maryland State record for hickory shad is 4 pounds, caught in the Susquehanna River in 1971.

The fishery remains a recreational catch and release fishery only, with DNR studies indicating a greater than 99 percent survival rate when properly handled.

The best shad fishing shad often occurs at dawn and dusk, when anglers are sometimes seen fishing arm to arm.